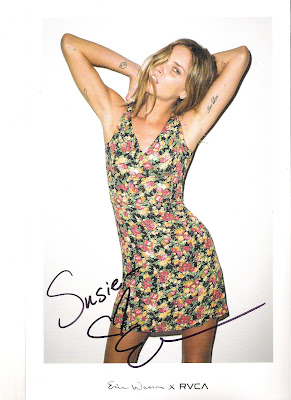 this week i had a major migraine, so was beginning to be shit week. but then i bought the emma cook for topshop boots [will come back to them], and then i met erin. sigh. even hotter in real life. she was at selfridges launching her line for RVCA [that i have been banging on about for what seems like forever, is now in selfridges. applause] i took numerous pictures of her, so many that i looked like a crazed fan [which of course is true] i qued up to meet her and got a signed picture [above and already bluetacked to my wall] and my dear friend albertine [who i dragged with me as she laughed as i got so excited/nervous at the prospect of meeting erin] took a picture of me with her [which i will frame] i talked to erin about her a/w collection [see previous posts]. she was so sweet, down to earth and unbelievably cool. [i will post pictures later] and i bought a vest from the collection...sweeeeeet.
Posted by susie miller at 02:56